It’s time to make some noise! Many of us are cheering the recent victory of the Golden State Warriors in the NBA Finals.

Golden State’s success has been a long time coming — 40 years since its last championship in 1975.

To make this moment even sweeter, the Warriors prevailed against a great Cleveland team led by a man widely acknowledged as the best basketball player of our time: LeBron James.

It hasn’t been long since the Warriors weren’t considered contenders, but their management and players worked hard on their basics and carefully built a team of winners.

Our Union team, the mighty UFCW 8-Golden State, has always been a winner, but we share some important qualities with the newly victorious basketball team.
Yes, we both have “Golden State” in our names. But we share something deeper as well — something at the core of the meaning of teamwork.

We call it “Solidarity.”

In everything we do, the team called UFCW 8-Golden State is committed to the success of everyone in the organization.

We succeed when each one of us does his or her part, bringing our individual gifts to promote the good of all. 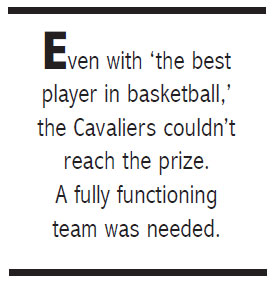 In this way, we win with the best wages, benefits and workplace protections in the many industries we serve.

As do the Golden State Warriors, UFCW 8-Golden State has depth. We have our stars — the Stewards who inform and inspire their co-workers, the Organizers who recruit new talent, the District Union Representatives who make the big assists and the Officers who call the plays — but every player has a role in the team’s success.

To carry the ball, or rather the analogy, further, let’s look at the team the Warriors defeated for the NBA championship.

LeBron James performed incredibly well throughout the regular season and the playoffs. But his teammates, stricken by injuries, were unable to perform at their highest levels to help him win the title.

Even with “the best player in basketball,” the Cavaliers couldn’t reach the prize. A fully functioning team was needed.

The Golden State Warriors were fortunate in having team members like Stephen Curry who can sink three pointers and drive to the basket with consummate grace. But they also had patient and good-hearted “bench warmers” like Andre Iguodala who waited their turn and got the job done. Iguodala didn’t play a single game in the regular season, yet he performed at such an extraordinary level during the Championship games, he was awarded series MVP.

We never really know what some people are capable of until they’re given an opportunity to shine.
The Warriors were in the game together. And so are the members of UFCW 8-Golden State who show the world, each and every day…