In April, more than 1,100 garment workers lost their lives when a shoddily-constructed building collapsed in Savar,  Bangladesh.

Workers at factories in the eight story building made clothes for sale in retail stores around the world, including Walmart.

This tragedy followed another catastrophe last November, when a fire killed 112 people in a garment factory in Tarzeen, also in Bangladesh. The factory lacked basic building features like fire escapes. 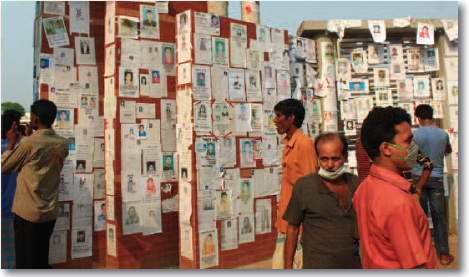 Poster display the names and pictures of missing garment
workers in Savar, Bangladesh.

In response, 75 retailers in the West formed a safety pact with their subcontractors for stricter safety protocols. The five-year agreement, called the Accord on Fire and Building Safety in Bangladesh, obliges the retailers to pay for building improvements.

Walmart, on the other hand, refused to act until it had a public relations disaster on its hands. Finally, after sustaining several weeks of criticism, the world’s largest retailer agreed to participate in a much weaker and unenforceable plan called the Global Alliance for Bangladesh Worker Safety.

This “alliance” proposes to raise $50 million for factory safety improvements, but it requires the Bangladeshi government to first guarantee its accountability for safety standards in the country.

Of course,we already know the government is corrupt and is influenced by Bangladesh’s garment manufacturers.

Furthermore, the international Workers Rights Consortium, which helped design the original agreement, notes the actual cost of raising the safety standards of Bangladesh’s garment factories could amount to $3 billion. Walmart could afford increasing the size of the fund a hundred fold, but clearly doesn’t want to.

A recent Washington Post editorial explains correctly how free and strong Labor Unions are essential for cleaning up the messes at foreign factories and sweatshops. Unfortunately, many governments disapprove of Unions and those caught trying to form one are often intimidated or even killed.

No wonder an anti-Union entity like Walmart finds such countries to be attractive places to do business.

It’s difficult to trust Walmart will ever do the right thing for its employees. The company has an infamous record of disregard for the safety, health and economic well being of those who work in its stores and contracted factories and warehouses.

Walmart vowed last winter to reevaluate its scheduling policies, which have forced even more of its employees into erratic part-time work schedules in the process denying them health benefits. Halfway through 2013, we have not seen any change.

After its Mexican bribery scandal last year, the company vowed to cooperate with Mexican authorities and its own investors to reveal how long Walmart’s leadership knew about the bribes.

As of May, investors continue to pressure the company to fulfill its promises of transparency. According to an Associated Press report, “Walmart attorneys had taken a  persnickety and narrow approach to turning over documents requested by attorneys for large pension funds trying to find out what, and when, company directors knew of the payments.”

What we can do

Executives at Walmart will keep resisting changes necessary for becoming proper corporate citizens, but we can do our part to exert our influence. We can start by refusing to shop there until the company moves away from its anti-worker culture and begins respecting the rights of its work force.

A European group called Clean Clothes Campaign is part of a worldwide coalition advocating corporate responsibility for apparel retailers. Respect for the organizing rights of workers is a high priority. 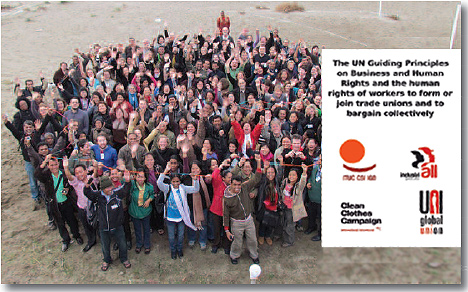 Poster display the names and pictures of missing garment
workers in Savar, Bangladesh.

For now, shopping at Walmart will only perpetuate the company’s ability to write off tragedies like the ones in Bangladesh as “unfortunate incidents” without any real consequences for the corporate bottom line.

What incentive does Walmart have to change when profits are high? When we shop in Union stores, we support companies with contracts guaranteeing employees are treated ethically and with dignity.

When we shop in Union stores, we demonstrate how the value of human life is more important than low prices.

Walmart needs to put its workers before profits and fulfill its promises to improve working conditions around the world. This includes enabling more of its employees in the United States to work full-time schedules, earn decent health benefits and enjoy dignity on the job and in retirement.

To learn more about how you and your family can continue to build Union strength, visit YourBreadAndButter.com.

Thank you for proving, once again … Solidarity Works!