Engaging Young Workers:
The Future Depends on Us

Do you remember the first person who talked to you about your Union?

Some of you may have to think back a few decades, while others may recall a conversation from a few weeks ago. Chances are you remember this person — a District Union Representative, a Steward or another co-worker, probably — with fondness and gratitude.

Typically, he or she was a kind, concerned and thoughtful individual who reached out to a young worker who felt a little lost and alone.

You may have been a high school student or a recent graduate, hired for the first time by a large company. Fortunately, there was someone who cared enough to speak with you about our Union and the great things it does for all of us.

I want you to become this someone for someone else.

Consider this: The United Food and Commercial Workers, which is the largest private-sector Labor Union in North America, also has the youngest membership. 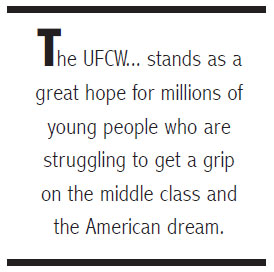 Forty percent of us are under 30 — about 450,000 people who work in supermarkets, drug stores, food processing plants, medical facilities, offices and other work sites in the United States and Canada.

This is an important responsibility and also a great opportunity to participate in building a better future for working people.

People who were born in the last two decades of the 20th century, commonly known as Millennials, have had a tough go in this age of industrial decline and growing disparity between a tiny wealthy elite and everyone else.

America’s recovery from the economic shocks of the previous decade remains painfully slow and the jobs being created tend to be in the retail, food-service and health care sectors, where wages have been historically low.

The UFCW, therefore, stands as a great hope for millions of young people who are struggling to get a grip on the middle class and the American dream.

Our Union’s members, young and old, consistently earn better wages and benefits than their non-Union counterparts. What’s more, we represent industries with jobs which cannot be sent overseas.

Young people commonly take jobs at our stores with the intention of moving on after a short while. But in time many of them learn to appreciate their prospects for a satisfying career. They can thank our Union for negotiating the compensa tion packages and work rules to make this a viable option.

It’s crucial for all of us to get this message out to young workers in the general population, not only to improve their lot, but also to strengthen our Union’s ability to negotiate strong contracts.

At the same time, it is equally important to engage the young people who already belong to the UFCW, including UFCW 8-Golden State.

They are the future of our organization. The more they understand and appreciate the benefits of Union solidarity, the greater our ability to confront and overcome the challenges awaiting us.

Please do your part. Regardless of your own age, take the time to get to know the young people in your

workplace. Share with them the values you have learned about Union solidarity and its role in securing our rights, our wages and our benefits.

Let them know how much your Union membership means to you. Explain to them how your contract works and why it is so important.

The future doesn’t just depend on our youngest members. It depends on all of us, including you.