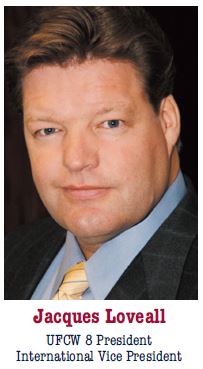 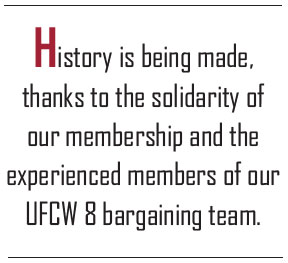 ‘Historic” is a word people are using — with justification — to describe the contracts our supermarket members have ratified across the state.

From the beginning of this arduous process, UFCW 8-Golden State and our allies at the other UFCW locals in California had a singular focus in mind: negotiating agreements which reward the hard work and sacrifice of supermarket workers throughout the COVID-19 pandemic.

We’re proud to say we succeeded in this task. The new agreements provide our members with the largest wage increases I’ve seen in my career. They also protect the high standards of our current health and retirement benefits and even feature major improvements.

No wonder the members voted by overwhelming margins to ratify these contracts!

In this issue of Voice of Action, we feature several pages highlighting the ratification votes. The smiles on the members’ faces tell the story.

Still, our task is not complete. Negotiations are ongoing with Raley’s and its Nob Hill and Bel Air subsidiaries, and more contracts are coming due for our members in the food processing, wine and distillery industries.

History is being made, thanks to the solidarity of our membership and the experienced members of our UFCW 8 bargaining team. Congratulations to all involved!